Links to the emails showing foreknowledge and discussion of the subject…

The first two emails below reveal that the Podesta/Clinton team fully understood that Qatar and Saudi Arabia finance ISIS and international terrorism. These email exchanges in this post took place immediately after the Wall Street Journal/Grimaldi article titled

“Foreign Government Gifts to Clinton Foundation on the Rise”

This entire effort should be done with a low profile, avoiding the massive traditional military operations that are at best temporary solutions. While this military/para-military operation is moving forward, we need to use our diplomatic and more traditional intelligence assets to bring pressure on the governments of Qatar and Saudi Arabia, which are providing clandestine financial and logistic support to ISIL and other radical Sunni groups in the region.

Last Thursday, April 12, I met individually with the Ambassadors from Qatar, Brazil, Peru, Malawi, and Rwanda, in Washington, DC. Below is a summary of key points from each meeting, and we are following-up on each point. I’d welcome your feedback. Sincerely, Ami QATAR – Would like to see WJC “for five minutes” in NYC, to present $1 million check that Qatar promised for WJC’s birthday in 2011. – Qatar would welcome our suggestions for investments in Haiti – particularly on education and health. They have allocated most of their $20 million but are happy to consider projects we suggest. I’m collecting input from CF Haiti team.

Subject: RE: WSJ | Foreign Government Donations I will leave all the defensive things to those who have and know the data for pushback. But there is a much larger strategic question that we need to resolve and stop this from spreading beyond today and probably tomorrow. And that is how quickly foundation stops. Even if we don’t announce it immediately, we may want to stop immediately. Obviously, doing this in the context of an overall strategy we can stick with is better than dealing with brush fires.

Qatar was for CGI

The only governments that donated to the endowment were: Saudi Arabia, Oman, and UAE

It would be nice to paint a picture of how this money is being put to work — even anecdotally.

More on their discussions and awareness of problematic Clinton Foundation donations from states that support terrorism or have a dubious record regarding support for terrorist related activities:

Excerpt: “This is why Morocco would be such a problem–more of this the first week she’s out selling her story.”

James Grimaldi, the same investigative reporter writing this larger piece about Foundation/State Department overlap with corporate money (which is still TBD in terms of when/whether it will run) is writing a piece for tomorrow about the Foundation’s acceptance of foreign money. The increase shows up on last year’s disclosure for a number of reasons, some of it related to ongoing programs, some because there was an uptick in foreign money after she left State and the MOU no longer applied. Craig and his team have been working with them all day to separate fact from fiction where they can, and have given them a strong statement about donors’ contributions to the Foundation being a result of the good work it does, but wanted everyone to have a heads up. Nick

Subject: Re: WSJ | Foreign Government Donations To answer earlier questions on this chain — we looked into foreign govt donations to former presidential libraries and foundations a while back. See memo attached. Will update to include Bush 43. Bush 41 received funds from Qatar, Kuwait, Japan, Oman, UAE for his library, including while his son was in office.

Sorry to be clear – foundation stops — means stop taking foreign gov’t money. Is that possible? If not we’re going to be very vulnerable on that throughout and I think our opponents and some on our side will say at is unseemly for a potential U.S. President taking money from foreign governments for her private foundation.

The Podesta team then went on to discuss the impropriety of taking money from Qatar and Saudi Arabia, as well as other Sunni Gulf states, and Morocco. To reconcile this impropriety they used examples of other administrations doing the same previously. This shows complete awareness of their ongoing actions, however, they still chose to accept the money regardless of how it may have looked and knowing full well that the states the money came from were ISIS/terroism backers.

Thus, at a minimum, the Wikileaks released Podesta emails prove that they were fully aware of their actions and that the countries they took the money from were ISIS-Islamic radical terrorism support states. This makes them complicit in supporting murder, international terrorism and terrorist related activities.

Link to original WSJ article that led to their discussions on impropriety:

Foreign Government Gifts to Clinton Foundation on the Rise

Recent post reveals that lead Saudi cleric terrorist commander in Aleppo, Syria receives extensive air time on Dubai Gulf State financed TV Channel “Orient TV” and is hailed in the Gulf States as a ‘revolutionary’ hero. There is no way realistically possible that the US surveillance apparatus and the Clinton team is not aware of this fact. If they are unaware of it then they are completely negligent in their duties and responsibilities to the American people they were appointed to represent.

MSM revelation of the subject:

Democratic presidential nominee Hillary Clinton’s Clinton Foundation and the Islamic State group (ISIS) both receive funding from the same sources in the Middle East, namely the government of Saudi Arabia and Qatar, Julian Assange claimed in a recent interview.

In an interview that will be broadcast by Russia Today (RT) on Saturday, the founder of the controversial nonprofit information dissemination organization WikiLeaks accused the former secretary of state of underplaying the support that the country’s allies in the Middle East provide to the extremist group behind numerous deaths across the world.

Assange, who has been seeking refuge in the Ecuadorian embassy in London since 2012, and his organization released over 30,000 emails from Clinton’s private server, along with about 20,000 emails from the Democratic National Committee and over 50,000 emails from her campaign manager John Podesta.

One of these email exchanges between Clinton and Podesta, then an advisor to President Barack Obama, had details of Clinton telling Podesta to “bring pressure” on the Middle Eastern powers “which are providing clandestine financial and logistic support to ISIL [Islamic State, IS, ISIS] and other radical Sunni groups,” RT reported.

More at IBT link above….

In a 2014 email made public by Assange’s WikiLeaks last month, Hillary Clinton, who had served as secretary of state until the year before, urges John Podesta, then an advisor to Barack Obama, to “bring pressure” on Qatar and Saudi Arabia, “which are providing clandestine financial and logistic support to ISIL [Islamic State, IS, ISIS] and other radical Sunni groups.”

I think this is the most significant email in the whole collection,” Assange, whose whistleblowing site released three tranches of Clinton-related emails over the past year, told Pilger in an exclusive interview, courtesy of Dartmouth Films. 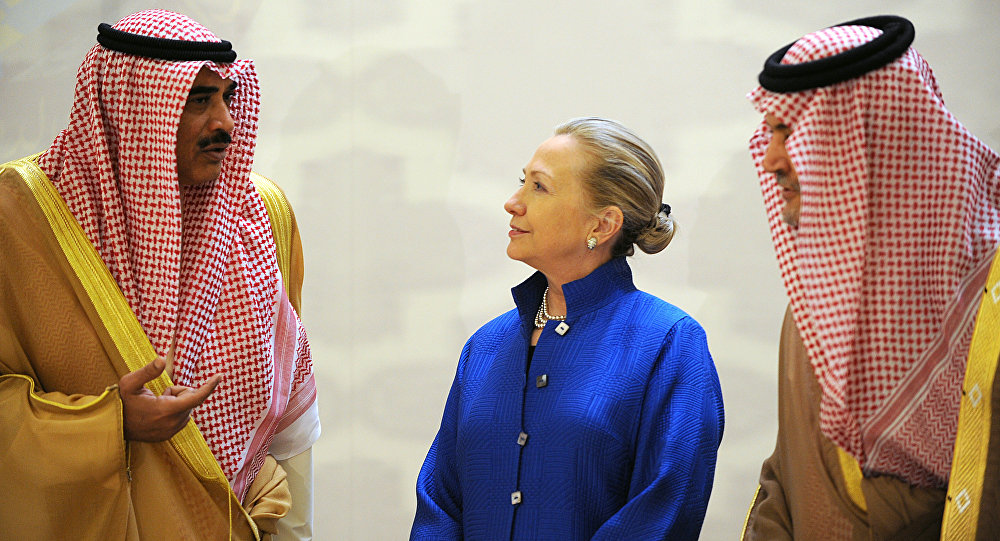