This post will delve into the Facebook postings, acquaintances and associations of Bethania Palma Markus who is the Snopes writer cited as the official so called ‘debunker’ of the claims that the White Helmets are terrorists posing as humanitarian aid workers in Syria. The official Wikipedia link of the White Helmets provides a citation from Snopes that leads to an article written by Bethania Palma Markus. Due to the fact that the Syrian war is such an important issue where millions of people are being displaced and killed one would think that highly professional and serious organizations/individuals would facilitate a proper non-biased investigation and verification of facts related to the war and organizations that facilitate Syrian war related propaganda. However, this does not appear to be the case. A quick look at the currently open Facebook page of Snopes employed writer Bethania Palma Markus shows that professionalism is being seriously disregarded.

Snopes which is used by Facebook and numerous mainstream media organizations for ‘fact-checking’ in the new “fake news” environment which was implemented, propogated and rolled out by the Washington Post and the secret group PropOrNot, is in fact employing a person whose Facebook page reveals them to be quite an odd character with many dubious connections that seem to point towards obvious bias and even online association with members of the FSA terrorist networks in Syria that are affiliated with the White Helmets who are in fact violent Islamic terrorists posing as humanitarian rescuers.

The fact that Snopes writer Bethania Palma Markus is considered the “go-to” source for accurate information on the White Helmets activities in Syria is truly an abomination and should be further examined by competent professional authorites. Here forth, I will layout the case that this person appears to be way out of their depth and is likely an incompetent propagandist. I will do this by utilizing screen captured images from their open Facebook page. The fact that Bethania Palma Markus left her personal Facebook page open for public viewing also should be taken into consideration when judging her competence, intelligence and character.

Link to the official Wikipedia White Helmets page where Snopes is cited for verification.

Now here’s where it gets really interesting and quite bizarre. The screen captured images below come directly from the Facebook page of Bethania Palma Markus. I have included snapped screenshots that include friends, associations and family members so that it can be easily verified that this is in fact the real Facebook page of Bethania Palma Markus. The page includes obvious Snopes affiliations, anti-Trump political biases, numerous media connections and various ‘friends’, some of which make up nefarious elements of the Syrian opposition forces associated with FSA terrorist groups.

Link to Facebook page of Bethania Palma Markus based out of Los Angelas, California 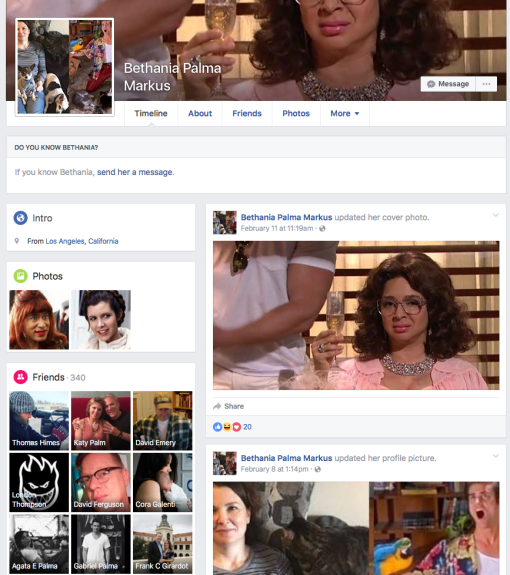 Because the page is so bizarre I thought it necessary to add screen caps of family links in order for readers to understand that it is indeed her real Facebook page. Her friends list includes the controversial Snopes writer Kim LaCapria as well as Snopes founder David Mikkelson, plus various family members with the same name.

On February 7th she changed her Facebook profile picture to Fred Armisen from the TV show Portlandia. These odd and petulant posts beg the question “Why is a person who posts absurd things like this being considered as the “arbiter of truth” when it comes to the White Helmet terrorist ruse and the atrocities that are being associated with them and the horrific Syrian war which is taking place thousands of miles away from their own home in Los Angeles?” 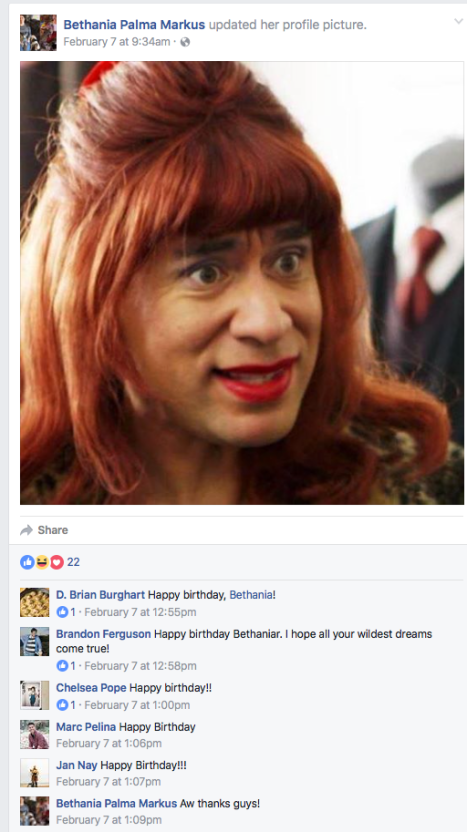 A look at the pages she likes shows her connections……. and her obvious biases.

2nd set of likes…..oddly the Satanic Temple is included amongst her likes.

Now here’s where it gets much more interesting……this screen capture of people Bethania Palma Markus follows shows one Hamid Khalib who is one of the self appointed civilian ‘photographers’ who has been aligned with the FSA and the White Helmets who are actually terrorists posing as humanitarian rescuers in Syria. Hamid Khalib’s photos/propaganda is often used by Reuters and other western mainstream media outlets to provide propaganda information for public consumption, and for support of the overthrow of the Syrian government.

Link to my previous post on the aforementioned subject: 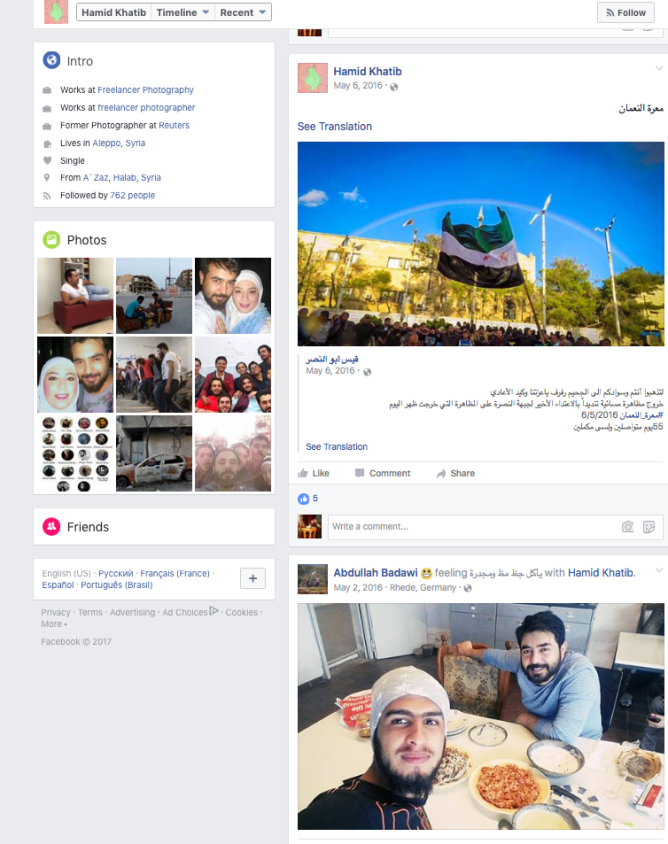 Note that in the photo above he is clearly on the side of the FSA. The FSA has been filmed on numerous occasions conducting atrocities and working with terrorist groups. Please see my additional posts related to FSA activities and connections to terrorist groups:

Note that Abdullah Badawi is the person in the lower photo sitting with Hamid Khalib at the table. Here’s a link to his Facebook page which shows that he shares the posts of Bilal Abdul Kareem who is one of the lead terrorist propaganda disseminators and has been filmed on numerous occasions giving praises and interviews to Abdullah al-Muhaysini who is the leader of al-Nusra Front in Syria. Bilal led the “Last Messages from Aleppo” propaganda campaign in December 2016 when Syrian and Russian armed forces liberated Aleppo from the terrorist groups.

On Nov. 10th the US State Department designated the Saudi cleric terrorist number one and the leader of al-Nusra Front terrorist group in Syria.

What all the above information points to is a serious breach of integrity on the part of Snopes and their obviously biased, immature and unprofessional writer Bethania Palma Markus. This person is supplying ‘fact-check’ data to Wikipedia, the mainstream media, the general public and social media sites such as Facebook on the Syrian war which is an extremely important geopolitical issue which affects millions of lives. A life and death issue such as whether the White Helmets are terrorists or not deserves to be examined by real investigative professionals, and the power to conduct such an investigation should not be charged to someone with such a strange, petulant mindset coupled with verifiable, obvious biases.

Further proof that Bethania Palma Markus’s Facebook page shows bias is in the additional friends she has under her friends list which include the following individuals and organizations:

The Black Lives Matter link she has on her page is also highly relevant due to the fact that George Soros supplied the group funding and he is also involved with the funding of opposition groups in Syria through Avaaz which is associated with MoveOn.org. Soros has a reputation for funding both sides of movements and hijacking SJW causes in order to incite conflict and produce desired results that benefit him.

Step 1: Create a false story (quote) and attribute it to other groups.

Step 2: Debunk the false quote while painting your adversaries as false news propagators

Pretty simple formula……..anyone can do it if they have enough money. Here’s an example of how Snopes debunks a story.

quote ostensibly uttered by billionaire George Soros about his goal of ‘bringing down the United States’ by funding ‘Black Hate groups’ is fake.

More Facebook friends and associates of Bethania Palma Markus highlighting Snopes media connections and what appears to be clear bias….

All these connections and apparently biased ‘reporting’ paints the larger picture of how war propaganda is being disseminated in the United States and around the world in the year 2017.

Caveat: All information contained in the above post was attained from open internet sources and Facebook webpages. All this information is considered theoretical for legal reasons, however, my asserted theories are backed up by information that the aforementioned parties either posted themselves or associated themselves with on their own open Facebook pages. This information provides a basis for examining the claims of the White Helmets further, as well as examining the role that Snopes and its individual content producers conduct in disseminating possibly false and misleading information related to the horrific Syrian war and the various ruses that are being playing out in the media sphere of influence over the general public.

Final point…..this is the link to the Satanic Temple that Bethania Palma Markus has under her Facebook likes…..

These are screenshots from that page:

The ‘likes’ of Bethania Palma Markus are quite bizarre….. to say the least.

More discrediting info on the Snopes company is available here:

Daily Mail – EXCLUSIVE: Facebook ‘fact checker’ who will arbitrate on ‘fake news’ is accused of defrauding website to pay for prostitutes – and its staff includes an escort-porn star and ‘Vice Vixen domme’ Read more: http://www.dailymail.co.uk/news/article-4042194/Facebook-fact-checker-arbitrate-fake-news-accused-defrauding-website-pay-prostitutes-staff-includes-escort-porn-star-Vice-Vixen-domme.html#ixzz4kOVIAdwz

Snopes, the Supposed Arbiter of ‘Fake News’ — Accused of ‘Defrauding Own Site to Pay for Prostitutes’ – Dec. 22, 2016

A Facebook search conducted on October 10th, 2017 showed that the Facebook page of Bethania Palma Markus is no longer online.

She is now posting at the following page: 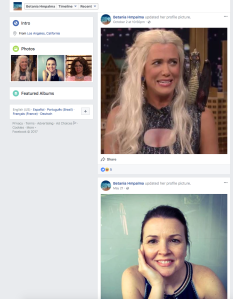 On October 27th, 2017 ABC news used Bethania Palma as their source for Snopes fact checking on the timeline of the October 1, 2017 Las Vegas Mass Shooting event at Mandalay Bay. That video is here: