Ben Swann, the only real investigative reporter on US mainstream TV, starts us off with a reality check.

The video directly above has now been removed from You Tube, an exact copy is at the following link:

Late on Friday, with the US population embracing the upcoming holidays and oblivious of most news emerging from the administration, Obama quietly signed into law the 2017 National Defense Authorization Act (NDAA) which authorizes $611 billion for the military in 2017.

In a statement, Obama said that:

Today, I have signed into law S. 2943, the “National Defense Authorization Act for Fiscal Year 2017.” This Act authorizes fiscal year 2017 appropriations principally for the Department of Defense and for Department of Energy national security programs, provides vital benefits for military personnel and their families, and includes authorities to facilitate ongoing operations around the globe. It continues many critical authorizations necessary to ensure that we are able to sustain our momentum in countering the threat posed by the Islamic State of Iraq and the Levant and to reassure our European allies, as well as many new authorizations that, among other things, provide the Departments of Defense and Energy more flexibility in countering cyber-attacks and our adversaries’ use of unmanned aerial vehicles.”

But while the passage of the NDAA – and the funding of the US military – was hardly a surprise, the biggest news is what was buried deep inside the provisions of the Defense Authortization Act.

Recall that as we reported in early June, “a bill to implement the U.S.’ very own de facto Ministry of Truth had been quietly introduced in Congress. As with any legislation attempting to dodge the public spotlight the Countering Foreign Propaganda and Disinformation Act of 2016 marks a further curtailment of press freedom and another avenue to stultify avenues of accurate information. Introduced by Congressmen Adam Kinzinger and Ted Lieu, H.R. 5181 seeks a “whole-government approach without the bureaucratic restrictions” to counter “foreign disinformation and manipulation,” which they believe threaten the world’s “security and stability.” Also called the Countering Information Warfare Act of 2016 (S. 2692), when introduced in March by Sen. Rob Portman, the legislation represents a dramatic return to Cold War-era government propaganda battles. “These countries spend vast sums of money on advanced broadcast and digital media capabilities, targeted campaigns, funding of foreign political movements, and other efforts to influence key audiences and populations,” Portman explained, adding that while the U.S. spends a relatively small amount on its Voice of America, the Kremlin provides enormous funding for its news organization, RT.

More at ZH link above…… 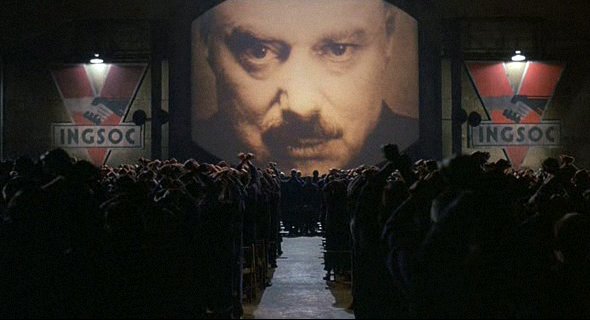 We are faced by a shocking fact these days: the profession of journalism, and I speak of mainstream media journalism, has descended into truly toxic levels of printed and broadcast disinformation. One can now virtually count on the fact that what is being said on any topic of political significance, will be a carefully scripted trotting-out of government and corporate propaganda.

That is not journalism. That is what George Orwell called ‘Newspeak’.

It is a dangerous game which these news hacks are playing. They are witnessing one event and describing it as quite another event. Let me amplify this by looking at the stories emanating out of the Middle East.

It must be obvious to most of us by now that Russia, via Putin, is being held responsible for pretty much everything which is no longer working well for Western engineered neoliberal/neocon globalism. In fact, the stream of accusations against Putin’s Russia have descended into near or actual farce, due mainly to the fact that they are not backed by any factual evidence. We are all simply supposed to ‘know’ that Mr Evil is at it again and that the West must ready itself to take action against his ‘tyrannical activities’.

And here’s how they do it……

Excerpt from article above:

Once a story has been flagged as fake, the most complex element of the new strategy begins. A Facebook spokesperson walked me through how the fact-checking process will work. Facebook is working with, to start, a handful of third-party, U.S.-based fact-checking organizations: ABC News, Snopes, PolitiFact, FactCheck.org, and AP. (The sites are part of Poynter’s International Fact Checking Network and have agreed to a “fact-checkers’ code of principles.”)

Because the group of third-party fact-checkers is small at launch, and as part of its effort to focus on the highest-impact “worst of the worst,” Facebook is doing some sorting before the reported stories go to the fact-checkers. Its algorithm will look at whether a large number of people are reporting a particular article, whether or not the article is going viral, and whether the article has a high rate of shares. Facebook has also already had a system in place, for about a year, that uses signals around content (such as how people are responding to it in comments) to determine whether that content is a hoax.

The end result is tailored to the Deep States needs via the Facebook process:

And who gets to do all this ‘fact’ checking for you? The FreeThought Project has the scoop on Snopes……

Snopes, the Supposed Arbiter of ‘Fake News’ — Accused of ‘Defrauding Own Site to Pay for Prostitutes

Snopes, the Supposed Arbiter of ‘Fake News’ — Accused of ‘Defrauding Own Site to Pay for Prostitutes’ Read more at http://thefreethoughtproject.com/snopes-fake-news-fraud/#Y7Zg8B1lsjShCDeA.99

Facebook’s choice to hire Snopes to arbitrate which news items will be allowed to stand and which should receive the Scarlet-Letter label ‘disputed’ already brought outrage — the site is notoriously left-leaning — but an exclusive report from the Daily Mail on alleged shady dealings should turn Mark Zuckerberg’s cheeks a deep shade of red.

David and Barbara Mikkelson, ex-spouses and founders of Snopes, have been hurling accusations allegations at one another in an ongoing bitter legal dispute following their divorce — and many of the claims don’t exactly give the company an air of professionalism.

Barbara, in court filings, accuses David of “raiding” Snopes’ bank account “for his personal use and attorney fees” and embezzling “$98,000 from our company over the course of four years, which were monies he expended upon himself and the prostitutes he hired …”

This part interested me because this person writes so much for Snopes. Is it true? Don’t know.

The irony of fake news being decided by Snopes is so ridiculous that even the Daily Mail UK saw fit to point it out…..

But the website’s own troubles and the intriguing choice of who carries out its ‘fact checks’ are revealed by DailyMail.com, as one of its main contributors is disclosed to be a former sex-blogger who called herself ‘Vice Vixen’.

Snopes.com will benefit from Facebook’s decision to allow users to report items in their newsfeed which they believe to be ‘fake’.

It is asking a number of organizations to arbitrate on items which are reported or which Facebook staff think may not be genuine, and decide whether they should be marked as ‘disputed’.

Husband and wife: David Mikkelson is now married to Snopes.com staff member Elyssa Young – but also engaged in a bitter legal battle with his former wife Barbara with whom he set up the site

How did this all come about? Fair.org decided to investigate the threat to powerful Washington Deep State information tools like the flagship “Washington Post” that sites that have been deemed ‘fake news’ are exposing…..

WaPo: Russian operation hacked a Vermont utility, showing risk to U.S. electrical grid security, officials say. Washington Post story (12/31/16) with revised headline and a never-mind editor’s note. Is this “fake news”? The putative scourge of “fake news” has been one of the most pervasive post-election media narratives. The general thrust goes like this: A torrent of fake news swept the internet, damaging Hillary Clinton and possibly leading to a Donald Trump victory.
A primary problem with this convenient-to-some narrative is that “fake news” has yet to be clearly defined by anyone. Vaguely conceptualized as misleading or outright fabricated stories, it can mean anything—as FAIR has noted previously (12/1/16)—from outlets that align with “Russian viewpoints” to foreign spam.

Additional Fair article explains how the whole ‘fake’ news meme was pushed out by dubious outfit PropOrNot in collaboration with the flag ship of the corrupt Deep State, the Washington Post….

The Washington Post (11/24/16) last week published a front-page blockbuster that quickly went viral: Russia-promoted “fake news” had infiltrated the newsfeeds of 213 million Americans during the election, muddying the waters in a disinformation scheme to benefit Donald Trump. Craig Timberg’s story was based on a “report” from an anonymous group (or simply a person, it’s unclear) calling itself PropOrNot that blacklisted over 200 websites as agents or assets of the Russian state.

The obvious implication was that an elaborate Russian psyop had fooled the public into voting for Trump based on a torrent of misleading and false information posing as news. Everyone from Bloomberg’s Sahil Kupar to CNN’s to Robert Reich to Anne Navarro to MSNBC’s Joy Ann Reid tweeted out the story in breathless tones. Center for American Progress and Clinton advocate Neera Tanden even did her best Ron Paul YouTube commenter impression, exclaiming, “Wake up people.”

But the story didn’t stand up to the most basic scrutiny. Follow-up reporting cast major doubt on the Washington Post’s core claims and underlying logic, the two primary complaints being 1) the “research group” responsible for the meat of the story, PropOrNot, is an anonymous group of partisans (if more than one person is involved) who tweet like high schoolers, and 2) the list of supposed Russian media assets, because its criteria for Russian “fake news” encompasses “useful idiots,” includes entirely well-within-the-mainstream progressive and libertarian websites such as Truth-Out, Consortium News, TruthDig and Antiwar.com (several of whom are now considering lawsuits against PropOrNot for libel).

PropOrNot says their criteria for “Russian propaganda” is “behavioral” and “motivation-agnostic,” so even those who publish views that simply coincide with the Russian government’s, regardless of intent or actual links to Russia, are per se Kremlin assets—an absurd metric that casts a net so wide as to render the concept meaningless. Glenn Greenwald and Ben Norton of The Intercept (11/26/16) called PropOrNot “amateur peddlers of primitive, shallow propagandistic clichés” who were “engaging in extremely dubious McCarthyite tactics about a wide range of critics and dissenters.” Fortune magazine’s Matthew Ingram (11/25/16) insisted the report had the “beginnings of a conspiracy theory, rather than a scientific analysis,” while AlterNet’s Max Blumenthal (11/26/16) lamented that “insiders have latched onto a McCarthyite campaign that calls for government investigations of a wide array of alternative media outlets.”