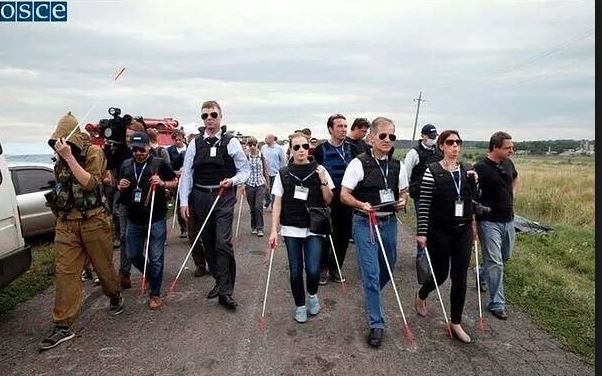 These are the current videos coming out of the war zone where American investigative journalist Patrick Lancaster is located and has been reporting on the killing of Donbass civilians by the Ukrainian army who have been relentlessly attacking the breakaway regions for the past 2.5 years. In the past week shellings have escalated and a number of civilians have been killed. The US and EU media are completely ignoring what is currently going on in the Ukrainian war zones. It has completely fallen off their radar that Ukraine’s Right Sector National Guard battalions continue firing upon and killing innocent civilians. The video’s below prove such……

2 killed, hospital, apartments, & school damaged in today’s huge a artillery attack on Donetsk
Published on Jan 30, 2017
On the second day of the Ukraine forces biggest attack this year on the Donetsk area at least 2 civilians have been killed with more injured. A hospital & homes were hit. A school full of children took some shrapnel damage and the school was evacuated..

4th civilians in 3 days has been killed by Ukraine shelling in the Donetsk area
Published on Feb 1, 2017
For the 3 rd day in a row civilians have been killed by Ukraine artillery fire in the Donetsk area,( Makeevka), 4 in 3 days. Today 39 year old Serkova Valentine Ivanovna has lost her life when a shell hit the coal shed that she was retrieving coal to heat her house from. After the impact she was almost completely buried in coal.

Published on Feb 1, 2017
Today artillery was fired on the residential neighborhood of Ockobersky in the Kyivs’kyi district of Donetsk. I went to the site and investigated the direction of fire. My conclusion using all the facts available was that the shells had to have been fired from Ukraine Government controlled territory. At least 4 Apt. building were hit.

The OSCE’s Alexander Hug continues to cover up for the Kiev regimes slaughter of civilians in Donbass. All victims are in Donbass. The OSCE clearly are aware of the direction of fire from which the shells came that killed those civilians. They know the Azimuth (trajectory and distance of rounds) as reported in Patrick Lancaster’s videos above, however, they always defer reporters to their online reports which strangely neglect to ever conclude that the Ukrainian army is the entity that fired on the civilian homes where people were killed. This has been going on for the past 2 years and 7 months. The OSCE is complicit in the coverup of the warcrimes.

More civilians affected over the last few months. Once again there was no reporting of these warcrimes in any western media.

https://www.youtube.com/channel/UCbjTWVaRx6jMN5ZYgbqe2_w/videos
British investigative journalist Graham Philips directly confronted the OSCE on the fact they never mention the Ukrainian army is killing civilians back in September 2016…..

Berlin authorities suspect that Poroshenko bears responsibility for the deteriorating situation in the east of Ukraine, German Süddeutsche Zeitung newspaper wrote. According to the newspaper, the Ukrainian government is trying to aggravate the situation in the country so that US President Donald Trump would abandon his plans on lifting sanctions against Moscow.

“The Ukrainian military is currently trying to shift the situation at the front line to their favor. Apparently, they accept the fact that tensions are increasing […]. Behind this position, according to some members of the German administration, could be an attempt to worsen the situation to the extent that US President Donald Trump’s plans to ease the sanctions are suspended,” the newspaper wrote.
German Government ‘Decisively Condemns’ Latest Escalation in East Ukraine

“According to Berlin’s interpretation, Poroshenko is ready to do anything to prevent the withdrawal of the sanctions,” the article said.
At the same time, German authorities believe that Kiev’s calculation can prove counterproductive. For instance, Donald Trump could ease the sanctions against Moscow regardless of how the situation in Ukraine might develop.

“In this case, Kiev will have to face double damage: an improvement in the situation for Russia with the simultaneous intensification of the conflict in the Eastern Ukraine. Whether it is possible to dissuade Kiev from its own provocations, Berlin doesn’t dare to predict,” the article said.